A number of babies born at Brocket Hall were adopted.  The two agencies that we know were involved are Hertfordshire County Council and the National Children's Adoption Society.

As far as we know only one Brocket Baby was baptised at Brocket Hall, to see a copy of the certificate click here

We think the birth records were destroyed by fire after they were returned to London but this has not been confirmed.  This is a frequently asked question and we would welcome any research on this topic.

They are believed to have been destroyed by fire after being returned to London, however it is possible that this is a cover for losing them, or destroying them in some other way.  But in any case they are sadly no longer available.  During general discussions with the National Archives on the retention of records they say they cannot retain all the records that are passed to them and have to make decisions on what have significant historic interest for the nation.  Whilst the records are unlikely to have been passed to them they thought it unlikely that any organisation could warrant the cost of keeping them.

When one Brocket Baby started research regarding Brocket Hall, she tried the National Archives who put her on to The Welcome Foundation. They drew a blank and all they were able to say was that after Brocket Hall was closed the records were returned to the Royal Northern Hospital in London.  When this closed down the records appear to have been lost.  Nobody seems to know what happened after that.  It's such a shame isn't it?

John Byrnes - When I was doing my research, I seem to re-call going to National Archive Centre - somewhere near Kew.  Loads of old buildings, reminded me of school huts.  I had to make an appointment, but once there the staff where really helpful.  They even let me take away some of the paper work from the adoption file.

For a very enlightening story about the Brownies please have a look at the 1944 Stories page and follow the link on story 6.

From Tim Reeves - a friend of Norah Hern (the midwife who celebrated her 100th birthday in August 2014).  Now it is my understanding that there was 2 tiers of unmarried mothers, those with money and those without.  Those without were asked to work at Brockett and associated lodgings to earn there stay, they were given brown uniforms and the babies either kept or adopted were called brownies.  Those with money, either well to do folk (or girls made pregnant by well to do folk) went to Lemsford house before giving birth and for rest after birth.  They went to Brocket Hall to give birth as the facilities were there for any complications, if the babies were in good health and were to be kept they would return to Lemsford with their mother but if they were up for adoption they would stay ay Brocket Hall and be looked after by nurses, they would be kept away from the other babies as most were secret babies.

Thanks to Ron Routledge for sending in the attached historical notes from "The Book of Welwyn" by Richard J Busby, published by Barracuda Books Limited. Page 91 Page 113

There is also information in the National Archives at: http://www.nationalarchives.gov.uk/hospitalrecords/details.asp?id=427&page=68

The Brocket Babies include Colin Berry the Radio 2 presenter, and Mike Leigh the film director.

Brocket Hall was featured on television in April - in a re-run of Inspector Morse.  It has also featured in a number of other films and programmes.  The following link provides some more:

The Hall was used as a 50 bed maternity hospital run by the Red Cross from 1939 to 1949 after a large part of the London City Road Maternity Hospital was damaged by fire.

On the outbreak of War in 1939, the London Maternity Hospital equipped and staffed Brocket Hall as a maternity unit for evacuated mothers. The maternity hospital in City Road was badly damaged by bombing on 10 September 1940, 16 April 1941 and 10 May 1941. Expectant mothers who were willing to leave London were evacuated to Brocket Hall.
At the end of war in 1946 the City of London Maternity Hospital took over financial responsibility for Brocket Hall from Hertfordshire County Council. It was decided not to rebuild the hospital on the very noisy site in City Road. Former homes for the blind in Hanley Road, Islington, were acquired from the Institute for the Blind and the hospital opened in Hanley Road in November 1949.

Lemsford House, next to the church at the entrance to Brocket Hall, was used to accommodate unmarried mothers with illegitimate babies born in Brocket Hall.

At the 2015 Brocket Baby Day Nora Pardy told Anne Ward that mothers who gave birth in Lemsford House must have had wealthy families as it was very expensive to stay there!

Lord Melbourne's Room was the centre of the birthing, and the Prince Regent's Chinese Room was used for recovering mothers, some of whom remember being startled by the Chinese style wallpaper as the anaesthetic wore off.

June Warner wrote 11 March 2015: Since I last contacted you concerning my sister Kathleen Warner, who was born and sadly died at Brocket Hall on the 27th August 1949, I've been trying to find where she is buried.  I've spoken to Barbra Taylor at St. John's Church and there are no records, also I've spoken to Hatfield Council, they checked their records and kindly phoned me back, saying that they couldn't find any.  I've since learned that babies that died at that time where given to the local undertaker to be buried in with the next burial taking place.  I have phoned just one undertakers local to Brocket Hall, the young lady was very helpful, but again there were no records.

Mrs Pardey (Midwife Hern) said that the undertaker from Welwyn garden city would come and take them for an informal burial, she thinks there was only one undertaker around back then so this should be easily verified.

At the April 2015 Brocket Baby Day June Warner met Mrs. Pardey and wrote: Mrs Pardey has told me that any stillborn babies, were cleaned & wrapped in a blanket, and this is how my father saw her in a cot, he said she looked perfect.  Then they contacted an undertaker at Welwyn Garden City, who would make a little coffin, and the child would be put into another burial site.  I have been trying to find out the names of undertakers that were working at Welwyn Garden City during August/September 1949, to see if they kept any records.  I'm still searching!  But I have had a result in trying to see if my sister had a certificate of her birth and as you can see from the copy, she was classed as Stillborn and this copy arrived a couple of days after being at Brocket Hall, I know my mother would be pleased. I would just like to thank you for giving me the opportunity to visit Brocket Hall, it was so nice to meet such lovely people, with interesting stories. 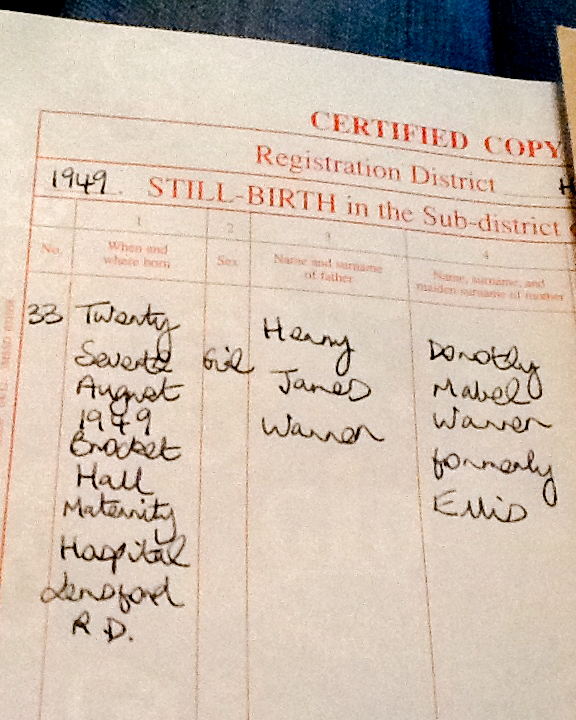