Besides Brocket Hall, Lord and Lady Brocket also owned Bramshill House which was used as a maternity Hospital in WWII.

In 1935, the house was purchased from the Cope family by Ronald Nall-Cain, 2nd Baron Brocket, the house's last private owner.  It was used by the Red Cross as a maternity home during the Second World War, after which it became the home of the exiled King Michael and Queen Anne of Romania for several years.

Bramshill House became a Grade I listed building on 8 July 1952, and was acquired by the British government the following year as a dedicated site for police training.  It became the location of the National Police College in 1960.  From 2005, two buildings on the site housed the European Police College (CEPOL) until this was moved to Budapest in 2014.

By the late 1980s the estate had become expensive to maintain, and according to John Wheeler, Chair of the Home Affairs Select Committee, by 1989 it was "in a poor state of repair".  In July 2013 the Home Office placed the house and estate on the market for £25 million. It was sold to the heritage property developers City & Country in August 2014.  In 2018, the house, with a reduced estate of about 90 acres, was put back on the market with a guide price of £10 million.  As of April 2021 it is still on the market Property for sale in Bramshill, Hook, Hampshire, RG27 (rightmove.co.uk).

Anne Smith wrote to us in December 2020 regarding her father in law John Smith 03/09/39, believing he was the first Brocket Baby.  Anne said hasn't dug out any paperwork or certificates yet with his mother's details on, but as he was orphaned in infancy his information is quite sketchy.

He always believed he was the first born at Brocket Hall and was presented with a teaspoon from Lord and Lady Brocket (as photo below) he also believed they were his God parents because of this, although there is no paperwork to support this, and as I say this information was told to him by his grandmother so may not be accurate.

Anne also asked if every child got a teaspoon. 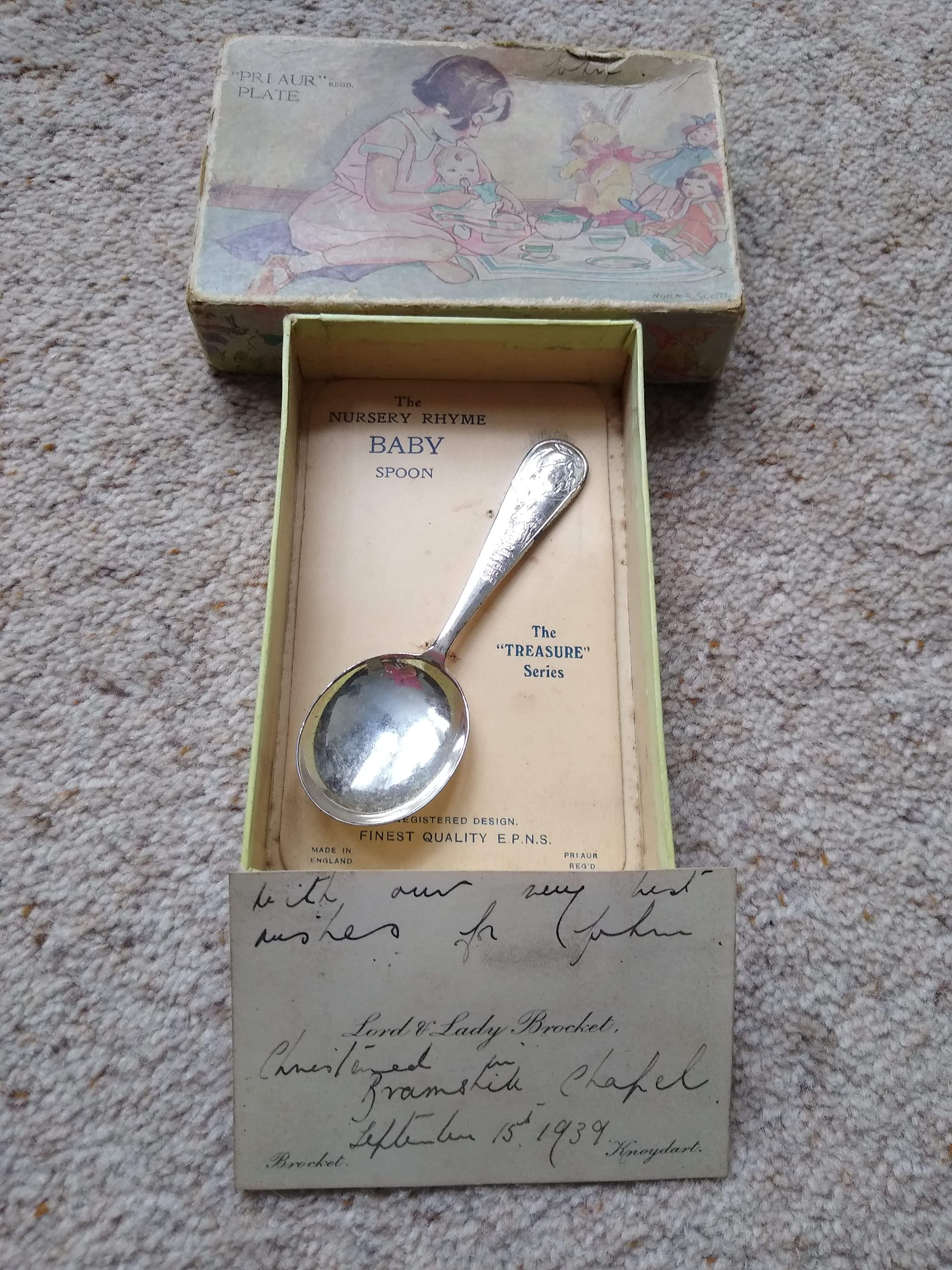 I fear we may have an imposter! I can only apologise as I have just been able to see my father in laws birth certificate and it says Bramshill Hall as his place of birth.  He believed they were the same place but obviously not.  I can see that 2nd Brockett acquired both estates and also Knoydart which is written on Johns card at around the same time in the early 1930s.

So he probably was the first born at Bramshill Hall as the Red Cross used it as a maternity unit.

Hope this hasn't caused too much inconvenience but he never had the information from his parents.

I certainly wasn't given a silver spoon at any time, but I was interested to read John Smith's story as I have been to Bramshill on a couple of occasions for open days.  The first when it was still a Police College and the House was open at Heritage Weekend, but there was high security fencing around the rest of the site.

My second visit was about eighteen months ago, for a guided tour of the property organised by English Heritage as it is a grade 1 listed building. Our guide told us that Bramshill, like Brocket Hall, had been used as a maternity hospital in war time and that there was an organised group for Bramshill Babies.  A few years ago the property was sold by the police and bought by a developer who had plans for a mini 'new town' - but planning permission had been refused because the development proposed included demolition of the house. So the property was then (and possibly still is) up for sale and apart from occasional hirings for use as a film set, lies sadly empty.

As far as we know there were no spoons given to the Brocket Babies, we checked our emails with Alan Lowe, the first Brocket Baby, and there is no mention of a spoon.